Stealing the Dragon by Mell Eight

Jerney, a witch who does work for a well-known thieves' guild, knows exactly who's to blame for the brazen theft. With no other choice in the matter, he quickly becomes entangled in trying to help the baby dragon. What he doesn't expect is that his own heart might get stolen in the process.

~~~~~~~~~~~~~~~~~~~~~~~~~~~
The promised baby dragon really is a baby—he might look like he’s a seventeen year old human (probably the author’s signal that “yes, I know he’s too young for a sexy story”) but in dragon years that makes him more like a bright four year old. Tori’s adorable, and part of his problem is that even people who know better treat him the way his human form looks, not in an age-appropriate manner. 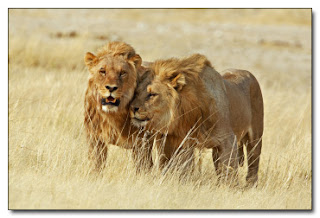 Time for another aww.... inducing picture. We haven't had a shifter in a while, so what might these two kings of the jungle be up to? Look here for directions. 100-1000 words is great. 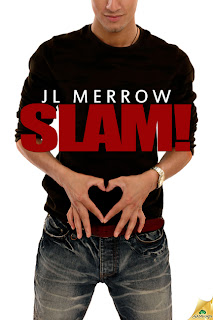 Jude Biggerstaff is all the way out and loving it—mostly. The Anglo-Japanese university graduate is a carnivore working in a vegan café, an amateur poet with only one man in his life. His dog, Bubbles.
Then there’s “Karate Crumpet”, a man who regularly runs past the café with a martial arts class. Jude can only yearn from afar, until the object of his affection rescues him from muggers. And he learns that not only does this calm, competent hunk of muscle have a name—David—but that he’s gay.

Jude should have known the universe wouldn’t simply let love fall into place. First, David has only one foot out of the closet. Then there’s Jude’s mother, who lies about her age to the point Jude could be mistaken for jailbait.

With a maze of stories to keep straight, a potential stepfather in the picture, ex-boyfriends who keep spoiling his dates with David, and a friend with a dangerous secret, Jude is beginning to wonder if his and David’s lives will ever start to rhyme.

Warnings: Contains a tangled web of little white lies, a smorgasbord of cheesy limericks, a violin called Vanessa, some boots that mean business, and the most adorable little dog ever. Poetry, it’s not...

After that blurb, the question isn’t what happens, it’s how. And it’s fun.

Stream of consciousness barely contained, that’s Jude. He’s flamboyant, funny, and when he bleeds internally, he bandages it with another joke. He’s head over heels for David, but what doesn’t go strange in one way goes strange in another. JL Merrow has “frequently been accused of humor” and this story earns her the shaky finger again, in the best way.

Lighting the Way Home by EM Lynley and Shira Anthony


World-class chef Joshua Golden is homesick for Paris before he even arrives in New York, but he’ll endure it—his parents need him to help run the family restaurant while his mother recovers from surgery. Running a place so far beneath his talents is bad enough, but bad turns to worse when Josh discovers his former best friend and lover, Micah Solomon, is living at his parents’ house with his ten-year-old son, Ethan.

For ten years, Josh has done his best to forget how Micah shattered his heart into tiny pieces. Now Micah’s back, fresh out of prison, and helping out at the restaurant. Micah may not be the kind of sous chef Josh is used to, but he is more helpful and supportive than any of the other employees. But Josh finds it hard to keep his distance when, time after time, Micah proves himself a better man than Josh thought. Reluctantly, Josh realizes there is more to Micah than his lousy life choices… but that doesn’t mean Josh is ready to forgive him.


This was a peek into a fully realized society for me—part of our American life but unique and with deep flavor. It’s not my background, but I wasn’t lost, and I was definitely intrigued. This is life in a New York Jewish community that’s accessible for those of us who aren’t of that background. The community was palpable but not overwhelming; Josh and Micah fit in but not in any predictable pattern. 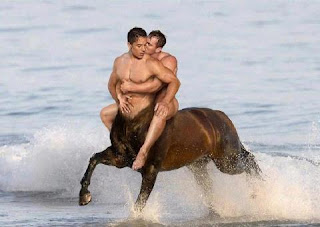 How about something straight from mythology? (Or not so straight?)  Anyone with a little story for these two, send it along, with links, a cover, and a blurb from one of your releases, and let us enjoy both. Look here for directions. 100-1000 words is great.
2 comments: Links to this post

After the demise of his relationship with his childhood sweetheart, Janey, Jesse needs to get away. His nan has just the thing: a month-long cruise around Hawaii and the Pacific Islands. It seems perfect—until Jesse realizes what kind of cruise it is.

Since Jesse’s roommate, Daniel, is recovering from a broken heart, the two decide to buddy up. They hit it off, and with Daniel now Jesse's partner in crime, they explore the boat and participate in all the fun activities on offer—with some, ah, interesting results for straight boy Jesse.

~~~~~~~~~~~~~~~~~~~~~~~~~~~~~~~~
This story was off to a rocky start—some things do not cross multigenerational barriers well. I was aghast at the beginning, where ultra-accepting Nan not only thinks about the MC’s sex life, she tells him what it is, and meddles in it. This woman is a combination of loving grandmother and Intrusive Female Best Friend with Inappropriate Curiosity. She’d probably be fun if I could get past that shrill NONONONONO! in my mind for the opening 10% of the story where she’s front and center. But I can’t. Others might. 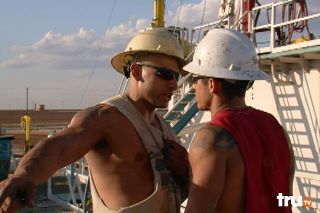 Can someone build a little explanation for these two? Look here for directions. 100-1000 words is great.
No comments: Links to this post 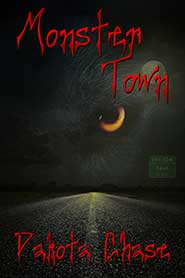 
James Dire has a problem. He doesn't breathe fire, suck blood, or sprout fur and a tail during full moons. He doesn't eat babies, or trample cities, or carry screaming women off to his underwater lair. In short, he's about as dangerous and exotic as a boxful of sand.

While this may not be an issue elsewhere, it is in Eden, James' hometown. Here, everyone, from his parents and siblings, to his classmates, to the mayor, are fire-breathing, bloodsucking, fur-sprouting monsters, and James doesn't fit in anywhere.

James always feels excluded and knows he's always suspect because of his difference. He's very shy, has few friends, and his only sense of purpose comes from his job as reporter for the school paper.
When a girl is kidnapped, James's secret crush, gorgeous werewolf, Theo, pulls him into a hunt for clues to find her before it's too late. What they discover is a plot that's much more involved than a simple kidnapping, and may get them both killed.

In Monster Town, there's nothing more dangerous than being ordinary.

Young adult is tricky territory: the age range intended is 12 to 18, and the styles cover the gamut from simplistic to quite literary. Monster Town feels like it should appeal to the younger edge of the range. The sex is nonexistent aside from an embarrassing erection and an almost but didn’t happen kiss. It’s skewed to a high amount of heart-goes-pitty-pat-he-likes-me! And it’s cute. While the story probably doesn’t have enough complexity to interest the older teens, I wouldn’t hesitate to put this story in the hands of 11-14 year olds, for style, the handling of the love interest, and the level of plot. Adults might find it a refreshing quick read.