Several months into the romance phase of their lifelong relationship, Cal Jerome and Ian Jeffries, of Go Fish fame, are just returning home from a vacation on the Jerome ranch and enjoying a taste of home that involves backyard barbecue and watermelon. Ian's never been particularly suave, so it's no surprise he ends up wearing more watermelon than he eats. Completely turned on by the image of Ian covered in watermelon juice, and now, equipped with a handy dandy rind with which to staunch the trademark Ian Jeffries mood-thrashing rhetoric, Cal decides sweet with a side of salty makes for spicy hot fun.

This one was great!

HT Murray has provided another look at Cal and Ian, who had to work so hard to get together in Go Fish. (Hmm, I read it, why didn't I review it? Maybe before…?) That was cute, and had some surprising, and, you'd think, unsexy elements to it, but it worked out great. Now the guys are back.

I love an 'established couple' story, because the story doesn't always have to be some potential couple-shattering event. Sometimes, it's all about the moment. Sticky Fingers is all about the moment, a sweet, salty, sexy, loving, teasing, happy moment that made me smile and be glad to spend the money and the time.

Port of Call Me -- Teddy Logan and Mel Spenser 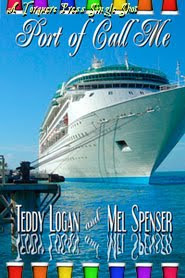 Peter is a recently spurned travel writer who takes a cruise and brings along his on again/off again friend, Tony. The guys meet up with Carlos, a sexy, hot Latino masseur who works on the ship.

However, it's Carlos and Peter who pair off. Even though their time together on the cruise is short, they are extremely attracted to each other. Peter has bad luck jumping into relationships too quickly, and Carlos has avoided hooking up with passengers for fear of becoming too attached, which is exactly what happens when he becomes involved with Peter.

Will Peter and Carlos decide to give their relationship a try? Does what happens on a cruise ship stay on the ship?

And yet-- what I was hoping for in a hot beach read, or a Lido Deck read, didn't quite come together. I never got the feeling that the characters were really engaged with each other. Situations that called for anger or lust felt tepid. I wanted the anger, I wanted the desire, but... I'm still wanting. It had all the elements in place, but they didn't quite move. The point of view didn't feel very settled -- there was a feel of head hopping and I found myself scrolling upward to see whose head I should be in this time.

Buy it here.
No comments: Links to this post