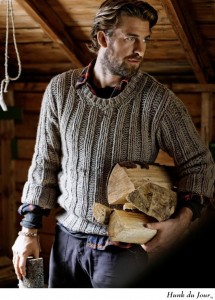 Oh wow, looks like Devyn Morgan has an excerpt from a story to go with our handsome mountain man!  This comes from Shaft Season, which just shot up to the top of Mount TBR.

**************************
Trevor started slicing vegetables with one eye out the back window. Don, dressed in a jacket light enough to accommodate the exertion and still keep the wind out, was swinging his ax at an upright log. Trevor still wasn’t a reliable shot with the ax, so Don preferred to split the kindling rather than watch potential death and dismemberment in the back yard. Bandit and Sabrina snoozed in the corner, not caring if their humans did the work they did best.


Not that Don hadn’t taught Trevor all sorts of things, including his special elk roast method, but Trevor knew spices and dishes Don did not. If the turmeric had to be special ordered, Don ate it and marveled aloud that Trevor had been to Thailand.

Don came in with an armload of wood, pausing in the kitchen to shed his boots and kiss the cook. “What are we having?”

“Moussaka.” Don ate vegetables more to please Trevor than because he liked them, so the best bet was to slather them with meat. “It’s Greek.”

“Moose-saka? Montana Greek.” He headed into the living room to build the fire.

“Stick with me, fella, and you’ll eat the world.” He and Don had been around the world, a couple dozen times, and might do some more traveling tonight. Don would still sleep at home, because this town was full of Mrs. Grundies. Once, just once, Don had stayed overnight in town. Trevor had inquiries about it later from neighbors. Yes, Don was fine, no, he hadn’t plowed that long driveway, and yes, he was too tired to do it after a full day so I gave him a bed was true, but an excuse that worked better when synchronized with the winter storms. Not that there was any shortage of snow. But it was none of their business. Yes, he fucked me into the mattress—why do you ask?” in his deadliest polite voice had been on the tip of Trevor’s tongue.

“So, what happened good today?” Don asked once the fire was built, with his chin hooked over Trevor’s shoulder and arms around his waist.

“Got an e-mail from my agent. At least, I think it’s good. Haven’t read it yet.” A grocery run for moose-saka ingredients was much more important at that moment.

They did the kitchen quickstep, Don following along and never once touching a spoon. Trevor loved it, and had yet to wash a pot or pan he’d dirtied cooking for his new—lover? Was this what a proper lover did? Participate, and ask questions, and be interested in the answers? Antony had worked out or watched movies, or demanded to go out whenever Trevor offered to cook. What had he seen in the guy?

Antony hadn’t even managed to get killed off properly. Trevor hadn’t been able to concentrate on staking the bastard—hey, there was an idea, Antony the vampire, done in by— By—

The agent of doom had to be something Antony would loathe. A busty young woman in sparkling clothing? Note to self, work on plot.

No, his last two books had been romances: Lumberjacks in Love demanded to be written and had poured out of his keyboard. Same with Dog Trainers in Denial. Hey, the readers asked for more, and nobody but Trevor had ever yearned to see Antony bleed on the page. Even Don, who’d called Antony an idiot and a jerk, hadn’t asked for literary vengeance.

Shoveling everything into the baking dish, Trevor had to ask, “I want to kill off a character. What’s a good way to dispose of the body?”

“Don’t know where your character is, but around here I’d drop him down an old mine shaft.” Don helped Trevor bend over to shove the dish in the oven. “Killing him first is optional if it’s deep enough.”

Trevor stood up fast enough to clack Don’s teeth. “Good Lord, does this town have a really high murder rate?”

Don rubbed his jaw. “Not really. Everyone knows everyone, they keep track. That’s the upside of your neighbors knowing what’s cooking in your pot. Might need to write the cop as a federal agent and the victim as someone everyone wants gone.”

“I see.” Trevor could write the dedication page now. “Thanks to Don, the kindest man with the most bloodthirsty imagination”. Note to self, remember this: it would sell. “We have forty-five minutes to food. Sex first or e-mail first?”

Trevor snorted. “Sez you. Off with the clothes, cowboy.” 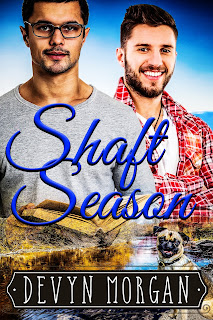 The mutual attraction is there from the get-go, but how is a mountain man supposed to fit into a Hollywood kind of life? And how can Trevor realize he’s worth Don’s masculine attentions?

They’ll both find out when winter turns to spring. Because spring is shaft season.

Shaft Season by Devyn Morgan is a standalone novella with a first time relationship, a lovable designer dog, and an HEA.

Tell us what you really think.